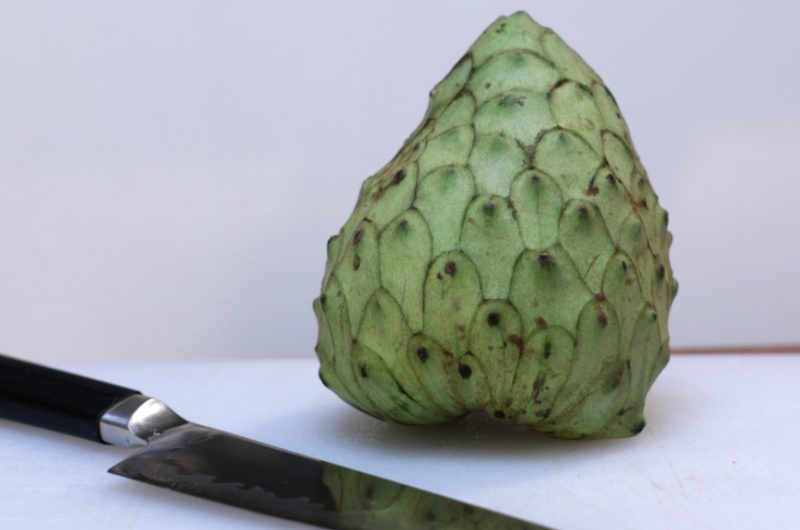 Cherimoya: How to Eat it and What it Tastes Like

I am a huge fan of learning about and trying new fruits as well as of course eating my favorite fruits. I first heard about the Cherimoya when I was shopping at Lowes for trees to grow. There it was, a little Cherimoya sapling being intrigued, I bought it.

The famous American writer, Mark Twain, wrote, “The Cherimoya is the most delicious fruit known to men.” Is he right?

In this article, you will learn all about the Cherimoya, where it comes from, and where it is cultivated. You will also learn what the nutritional benefits are, how to eat it, and what it tastes like.

Where does the Cherimoya come from and where does it grow?

The cherimoya (Annona cherimola) also spelled, chirimoya, chirimuya also goes by the name custard apple. It is closely related to the sweetsop and soursop fruits which all belong to the family Annonaceae.

It is native to Peru, Ecuador, Colombia, Chile, and Bolivia. However, it is cultivated all around the world in Central America, South America, Southern California, Florida, Hawaii, South Asia, Australia, North Africa, Portugal, Southern Spain, in the Mediterranean, Cuba, Jamaica, Puerto Rico, India, Thailand, to name several of them. There are other places and countries that grow it as well.

Cherimoya trees thrive in the tropics at higher elevations, between 4000 and 8000 feet but do not like frost and snow.

It is believed that it originated first in Central and South America, then it spread to other countries. As explorers returned back to their homelands with this amazing fruit.

It doesn’t grow very well in the Phoenix desert where I live, after a few years of struggling in a pot, my sapling died on me. The Atemoya, which is a hybrid between the Cherimoya and the sugar apple is a little better suited to growing where I live.

What are the nutritional benefits of the Cherimoya?

The cherimoya is loaded with nutritional benefits. Below are a few of them:

How to eat the Cherimoya?

The cherimoya is a fairly good-sized fruit that is green with hints of brown and black. The shape is very similar to a heart. The outside skin is somewhat smooth and has a scaly look to it. It kind of reminds me of a dragon’s egg.

How do you know when it is ripe?

You will know when it is ripe when you gently squeeze it with your palms it should give to the pressure, similar to avocado and pear. There should not be too much black or brown coloring on the skin.

They are normally picked before being fully ripe so they can last longer before they are sold. Most likely when you buy it at the supermarket you will want to let it sit at room temperature for a few days to soften up and ripen more.

To eat it, just cut it in half with a knife.

Then you will seed smooth black or dark seeds. Use a knife or spoon and scoop those out. They are not edible, do not eat them. They may be poisonous. The skin is not edible either.

Inside you will seed a beautiful white custard-looking flesh. It should be soft, if it is too hard the fruit is not ripe yet. Cover it with plastic wrap and place it in the fridge for a few more days to soften more.

You can cut it into chunks and eat it that way. Or a lot of people will just dig the flesh out with a spoon and eat it.

The Cherimoya or custard apple is commonly eaten fresh/raw or put in smoothies, ice cream, and yogurt.

When ripe the flesh will be soft and custard-like. The texture will be similar to custard as well with a little bit of stringiness to it.

To me, the texture is extremely pleasant. Taste is very subjective, but it has been described by others as tasting like a mix between a pineapple, banana, strawberry, papaya, and peach. I am inclined to agree with them.

The Cherimoya tastes very similar to that to me. And since those are some of my favorite fruits, that puts this fruit in my top favorite fruits category right up there with the mangosteen.

The strawberry has long since been my favorite fruit of all time, but the mangosteen, pineapple, mango, are a very close second place.

Let me know if you have tasted it before and what you think about it in the comments!

Watch my video about the amazing Cherimoya:

Here are other articles and recipes you may find interesting: