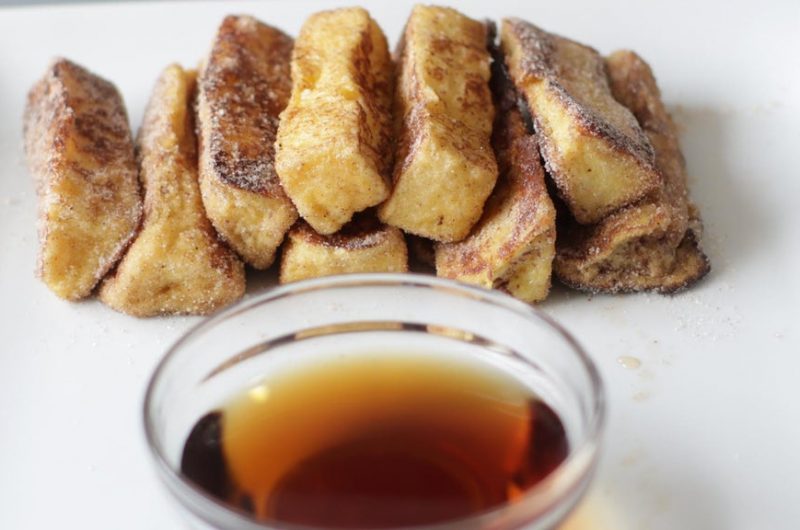 French toast is one of my favorite things to eat for breakfast. And there are so many variations you can try like this classic French toast recipe, this French toast roll-ups recipe, and these French toast bites. And now I bring you these amazing Cinnamon French Toast Sticks.

If you like finger foods, these cinnamon French toast sticks are perfect for you. You could put together an amazing breakfast platter or maybe a breakfast charcuterie board, and include these. Have several different dips for them and it is sure to impress your friends and family.

Cinnamon French Toast sticks are super easy to make, with just a few ingredients, if I can do it, you can do it. Let’s get started!

In order to make these super easy cinnamon French toast sticks you need just a handful of easy to find ingredients:

Begin by adding the eggs to a large bowl along with the milk. You can use cream too if you like or something like almond milk, if you are lactose intolerant.

Whisk those together and then add in a few shakes of cinnamon. I love cinnamon!!

This step is identical to if you were making normal French Toast.

Pick a thick-cut bread, I like to use Texas Toast style. You can use any bread that you want, but the thicker slices tend to work better for this.

Now time to cut that bread into sticks. If it totally up to you if you trim the crust off or not. They will look better if you do. I like to save the trimmed crust, dry it out, and then make fresh bread crumbs with it.

Then slice it into about three sticks per bread.

These are called Cinnamon French Toast Sticks for a reason. Take the sugar and add it to a pie plate or normal plate. Add cinnamon to it and stir. You can add more or less cinnamon. This part does not have to be exact.

If I have any leftover, I will pour it into an empty spice shaker, then I always have some cinnamon and sugar mix on hand for other recipes as well like these cinnamon twists.

Take a large skillet, preferably non-stick, or a pancake griddle and heat it up on medium heat (350 F/176 C). You may also start heating the skillet up at the beginning if you like.

Add a dollop or knob of butter as my pal Gordon Ramsay would say. Just enough to cover the bottom of the skillet.

You may also just spray it with a cooking spray or use a bit of cooking oil.

Now give the sticks of bread a good dunk in the custard/egg mixture. Don’t let them soak too long, the bread will get super soggy and not work out well or also fall apart on you. Especially if you have thinner slices of bread that you are starting with.

All you need to do is coat each side.

Now add the cinnamon French Toast sticks to the skillet and brown all sides of it. It will take 4 to 6 minutes or so, total about a minute per side. Keep turning each side with tongs.

These take a little more time than classic French toast because you have more sides to brown, but it is worth it. 🙂

Once done, use the tongs and remove them, and put them on a plate.

Step 4: They see me rollin’ in sugar…

Now roll those amazing French Toast sticks in that cinnamon and sugar mixture. Use clean hands or tongs to do that.

Serve them with little bowls of syrups, like maple, strawberry, berry, chocolate, etc. Any of your favorite toppings for French Toast.

Once they are cooked you can store them in a ziplock bag or an airtight container for 4 to 6 days in the fridge. Or you can freeze them for about a month. Just reheat them in the microwave or in the oven when you want to eat them again.

Here are some other breakfast recipes you may like: 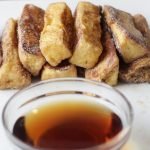 NOTE: The calories will vary depending on the bread that you use, if you keep the crust or not, and the dips that you use.