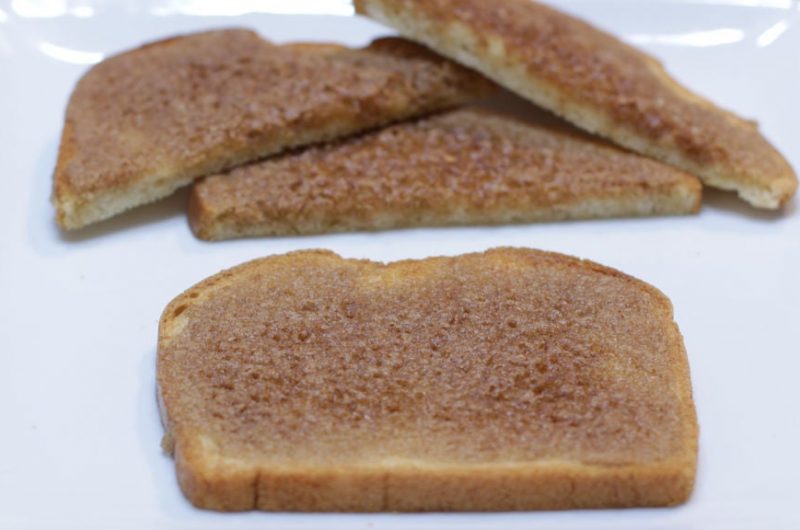 One of my favorite childhood food memories was making this cinnamon toast with my mom and siblings and friends. It is so yummy! How can you not like cinnamon, butter, and brown sugar on bread?

I really enjoy eating this even as an adult. Cinnamon toast is a quick and easy treat that you can have for breakfast or as a dessert or snack. Your kids are doing to love this, if you save enough for them, that is. If I can do it, you can do it. Let’s get started!

In order to make this incredibly east treat, you need just a few everyday ingredients:

Begin by preheating the oven to 350 F/176 C. Then in a medium bowl cream together the butter, cinnamon, and brown sugar. I generally just use a spatula or fork or spoon.

A hand mixer will work too, but it definitely isn’t necessary. This will be the cinnamon and sugar paste that we will add to the bread. Similar to what I do for these homemade no yeast cinnamon rolls.

Now all you need to do is spread that paste onto your slices of bread. Again, you can use whatever kind of yeast-based bread that you want.

I like to start by adding a large dollop of cinnamon and sugar paste onto each slice before I spread it. This way I know I am spreading on about the same amount for each slice.

If you want the spread to be thinner, you can will able to use one maybe two more slices of bread. But I really like how it turns out like this.

Now bake the bread in the oven, middle rack position, for 8 to 10 minutes. Then turn the oven to broil, and crack open the door of the oven. Let them cook on broil for 30 to 45 seconds. Make sure to watch them very closely, otherwise they will burn. So, don’t walk away from them at this point.

When they are done, they will be nice and golden brown around the edges, the bread will look toasted, and the top will be caramelized.

Remove the cinnamon toast from the oven and allow them to cool for a few minutes before serving.

Be careful! The melted top layer of butter, cinnamon, and sugar is very hot and will burn your mouth if you bite into it too quickly. Other than that, enjoy!

While it is definitely best eaten fresh, you can store it after it cools, in a ziplock bag on the counter for a day or two, or in the fridge for a few more days. It just won’t taste as good.

And you will need to reheat it in the oven to get that toasty crunch back. I really recommend only making what you will eat right away. 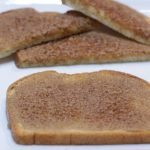 Butter, cinnamon, and brown sugar on bread? Four of my favorite things, yes please! I made cinnamon toast all the time while growing up. It is such an easy and cheap thing to make for breakfast or for a dessert. If I can do it, you can do it!
Prep Time5 mins
Cook Time10 mins
Resting Time5 mins
Total Time20 mins
Course: Breakfast, Dessert, Snack
Cuisine: American
Keyword: crisp, crunchy, easy, kids, sweet
Servings: 4 people
Calories: 209kcal
Author: Matt Taylor

Note: The nutritional facts will vary slightly depending on the type of bread you use.

Do you like the recipe? Please give it a rating and comment down below, I really appreciate it. If you make it tag me on Instagram @inthekitchenwithmatt. Also, sign up for the newsletter so you won’t miss out on any of my new posts and recipes.

Here are a few more recipes you may like: