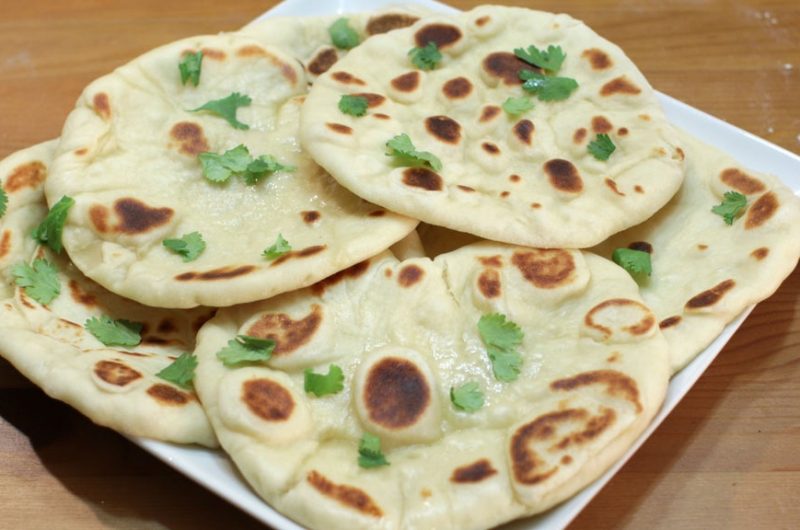 I just love this homemade Naan. Bread in general is one of my favorite things to make and eat, especially yeast-based bread.

In this recipe post you will learn how to make homemade Naan without using a Tandoor also known as a Tandori Oven. A tandoor is a cylinder clay stove that is used for making Naan and other dishes. They are expensive and usually you only find them in restaurants. But if you have one, feel free to use that with this recipe!

Naan is very popular all over the world particularly in Western and South Asia, Indonesia, and Myanmar.

I love eating homemade Naan plain or basted with butter. Also, it is fun dipping it in hummus, yogurt, or using it as a flatbread sandwich. You could even butter it and sprinkle cinnamon and sugar on top if you wanted! Naan is easy to make at home, if I can do it, you can do it. Let’s get started!

Homemade Naan doesn’t require a lot of ingredients, in fact you only need 7 easy to find ingredients. Most of which you probably already have in your home right now:

Step 2: How to make homemade Naan

If after 10 minutes the mixture isn’t foamy, start again. The yeast may be bad or old or the water was too hot or not hot enough.

Once the yeast has been activated, add in the rest of the sugar, the yogurt, and the olive oil. Mix it well with a whisk or fork.

Now, add in about 1 cup of the flour along with the salt. Whisk that together until the mixture is smooth. Then you can put the whisk away and switch to a wooden spoon. Or if you are using a stand mixer you can switch to your dough hook.

Add in another cup of the flour and stir it into the homemade naan dough. The dough should pull away from the sides of the bowl.

Use some of the leftover flour and dust the top of a work surface. Pour the dough out onto it and begin kneading it. Add more of the flour as necessary and knead the dough for about 8 minutes. Of course you can use your stand mixer for this if you like.

Spray a large bowl with cooking spray, or add a little bit of oil to it. Then place the ball of dough in it, cover it with a damp towel, or plastic wrap, and allow the dough to rise for about an hour or until it doubles in size.

Once the dough has risen, place it on a floured surface, then divide it into 6 to 8 equal pieces depending on the size you want the Naan.

Roll each piece out flat in a round shape with a rolling pin until they are about 1/8th of an inch thick. Dust off any excess flour with your hands or a basting brush.

Time to cook them! Place your cast iron skillet which works really well for these or a nonstick skillet on the burner and set it to medium-high heat. Allow the pan to heat up until it is really hot.

Add a piece of dough do the skillet and let it cook for a few minutes, it won’t take long. Once little bubbles form on top, it is time to flip it over and cook the other side for a minute or two. It may puff up on you as well which is totally fine and natural for that to happen.

The homemade Naan will be done when there are nice brown spots on each side. Remove it from the pan with tongs and place it on a plate.

I like to butter the Naan after putting it on the plate. This is purely optional. You can also garnish the top with cilantro or parsley to give it a bit of color. And there you have it, fresh homemade Naan. That you can add as a side dish to many different meals. Enjoy!

How long does homemade Naan last?

Store it in a ziplock bag and it will last 5 to 7 days at room temperature or a few days longer in the fridge. You can also wrap them individually and freeze them for a few months.

Here are a few more bread recipes you may like: 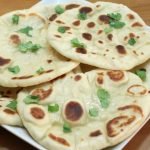 Do you like this recipe? Pin it! Please give it a rating and comment down below, I really appreciate it. If you make it tag me on Instagram @inthekitchenwithmatt. Also, sign up for the newsletter so you won’t miss out on any of my new posts and recipes.