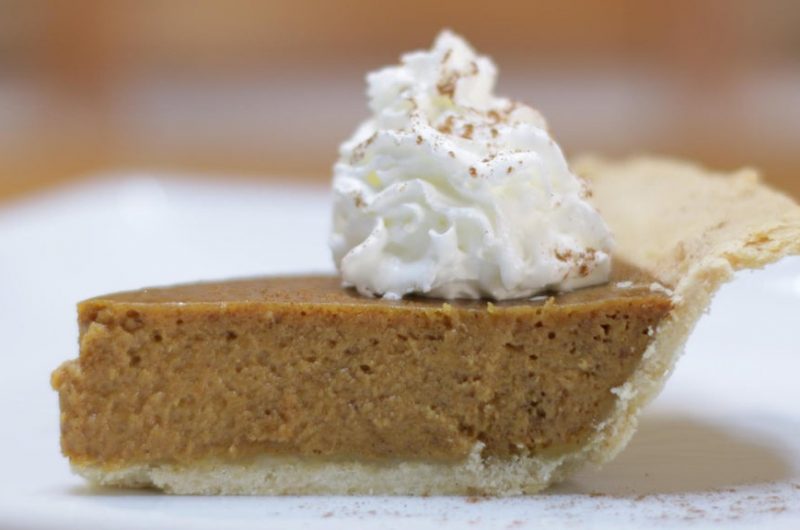 This homemade pumpkin pie recipe is so amazing! I know, I know, it is so much easier to buy a pre-made pumpkin pie. Try making it at home and see if you like it. I dare you.

I will admit growing up, homemade pumpkin pie wasn’t my favorite pie to eat. It was definitely one of my brother’s favorites! He always wanted it on his birthday, which happens to fall in October. My favorite was always, apple pie, berry pie, or peach cobbler.

As I get older, I have come to love the taste of pumpkin and especially homemade pumpkin pie. It is so easy to make too! If I can do it, you can do it. Let’s get baking!

Time to gather up the ingredients that you will need for this homemade pumpkin pie:

Tip: You can also just use 1 tsp. of pumpkin pie spice instead of using ginger, nutmeg, and cloves. If you do, only use 1/2 tsp extra cinnamon.

Step 2: How to make an amazing homemade pumpkin pie

Star with the pie crust. If you like you can make this homemade pie crust, otherwise, a store-bought one will work fine, either the frozen kind in the pie plate or the rolled-up refrigerator kind. If you made a homemade crust, put it in the freezer for about 10 minutes. Preheat the oven to 375 F/190 C.

If your pie crust is frozen, remove it from the freezer and allow it thaw for about 10 minutes. Ideally the pie crust will be cold when you put it in the oven.

Add a piece of parchment paper to the inside of the pie crust and then place beans or pie weights in it. This method keeps the pie crust shape, helps prevent shrinkage, and the bottom from puffing up, while it is “blind baking.”

Tip: Place the pie pan on top of a sheet pan or cookie sheet. This will make it easier to put in and take out of the oven.

Bake the pie crust for 15 minutes on the middle rack of the oven. Remove it from the oven, and take out the parchment paper and beans. Then place the pie crust back in the oven and bake for another 15 minutes, just until slightly golden brown.

If the edges of the pie start to get too brown, you can place foil around the edges to protect them. Once done baking remove the pie crust and let it cool while you make the homemade pumpkin pie filling. This is referred to as “blind baking” the crust. It also ensures the pie crust is thoroughly baked through.

The homemade pumpkin pie filling is super easy to make. Begin by separating the whites from the yolks from three of the eggs and add the yolks only to a large bowl. Then add one full egg to the bowl as well. You can make something else like an omelet with those leftover egg whites.

Tip: You can also just use 1 tsp. of pumpkin pie spice instead of using ginger, nutmeg, and cloves. If you do, only use 1/2 tsp extra cinnamon.

Mix all of those ingredients together with a whisk or use a hand mixer or stand mixer. And there you have it, the homemade pumpkin pie filling is done. Super easy right?

Pour the pumpkin pie filling into the pie crust. It should fill up pretty much to the top, if you are using a 9-inch pie pan. Give it a slight jiggle to help settle any air bubbles. If the pan is still too hot, then wear oven mitts.

Turn the heat on the oven down to 325 F/162 C. Bake the pie for 45 to 55 minutes, until it is dry looking around the edges and slightly jiggles in the middle.

Check it after 20 minutes, if the edges of the pie are getting too brown, you can place aluminum foil on them. Be careful it will be hot!

When the pumpkin pie comes out of the oven, it may be a bit domed on top. Don’t worry, it will settle down flat as it cools. Allow it to cool for 2 to 3 hours at room temp so it can properly set.

After the pie cools and sets you can cut into it and serve up a slice.

Tip: A trick that you can do to help get a nice clean cut, is to heat the knife in a glass of hot water, then wipe the water off, and then make your cuts with the warm knife. I do this with cheesecake as well. It keeps the pumpkin pie from sticking to the side of the knife when cutting.

Top off that slice of homemade pumpkin pie with some whipped cream and cinnamon if you like. Enjoy!

Can I use fresh pumpkin instead of canned pumpkin?

You absolutely can make a fresh homemade pumpkin puree and use that instead of canned pumpkin.

Love pumpkin? Here are a few other pumpkin recipes you may like: 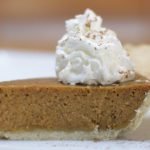 Note: These nutritional facts are for a slice of pumpkin pie only, doesn’t include any additional toppings like whipped cream. Tip: I like to put the pie plate on a sheet pan, so it is easier to remove from the oven, instead of having to grab the plate itself. Tip: You can also just use 1 tsp. of pumpkin pie spice instead of using ginger, nutmeg, and cloves. If you do, only use 1/2 tsp extra cinnamon. Tip: A neat trick that you can do to get a nice clean cut, is to heat the knife with hot water, then wipe the water off, and then make your cuts. Exactly like we might do with cheesecake. This keeps the pumpkin pie filling from sticking to the side of the knife when cutting.

Do you like this recipe? Pin it if you like. Please give it a rating and comment down below, I really appreciate it. If you make it tag me on Instagram @inthekitchenwithmatt. Also, sign up for the newsletter so you won’t miss out on any of my new posts and recipes.