How to Make Ground Cinnamon From Cinnamon Sticks

Cinnamon is one of my favorites if not my favorite spices to smell, use, and cook/bake with. Especially if you like grinding your own spices, you need to learn how to make ground cinnamon from cinnamon sticks.

I mean you can’t make homemade cinnamon rolls without cinnamon! So many amazing dishes both sweet and savory require cinnamon.

Don’t let the long somewhat hard fresh cinnamon sticks intimidate you, they definitely grind, and with the right equipment or tools, they grind fairly easily.

What ingredients and tools do you need to grind cinnamon sticks?

There are several methods and ways for grinding cinnamon sticks and making homemade ground cinnamon powder. Each method requires specific tools. But they all require:

Pick out some good high-quality cinnamon sticks to use. I get mine online, but they can be found at most supermarkets and specialty markets like Trader Joe’s, Whole Foods, Sprouts, etc.

Tools for each method:

How to Make Ground Cinnamon from Cinnamon Sticks

Once you learn how to make ground cinnamon at home you may never go back to buying pre-ground cinnamon. It is so fun to make at home, so fragrant, and just plain awesome.

In this recipe/tutorial, I showcase several methods on how to make ground cinnamon from cinnamon sticks. You may already have some of the equipment/tools needed at home.

I will cover both manual and mechanical/electrical methods for grinding cinnamon sticks into cinnamon powder.

There are three main manual ways that you can use to grind up cinnamon sticks into cinnamon powder. There are probably other ways, but these are the most popular:

The first way, and my favorite way, if I just want to top a dessert or something with fresh cinnamon is by using a Microplane zester. It is a super handy tool that I use for citrus zest but also works great for grinding cinnamon sticks and nutmeg.

Just hold the zester over a bowl or over your dish, like homemade rice pudding or peach cobbler, and run the cinnamon stick over it. It will shave very fine shavings of cinnamon. They aren’t quite as fine as cinnamon powder, but still are awesome, and make for a perfect topping.

If you need more to add to a recipe, you can just spend a few minutes running the stick over the zester which will give you easily enough for 1/4 to 1/2 tsp.

The other popular manual methods are as follows:

Just throw the sticks in a Ziploc bag, seal it up, then take a meat tenderizer and pound those cinnamon sticks into powder. This is a fun way to release some aggression, haha. Plus, for some reason, I always feel cool wielding the meat tenderizer (mini Thor’s hammer).

When it comes to making fresh ground cinnamon from cinnamon sticks with electric/mechanical equipment two main ways come to mind:

The first is to use a high-speed blender. A Vitamix or Blendtec or something similar will work great for this.

Place the cinnamon sticks in the blender and blend on the highest setting for no more than 30 seconds at a time. If it runs too long it may cook the cinnamon.

Remove the lid and look at the progress. Chances are after the first 30 seconds, you will have nice fine cinnamon powder on the sides of the blender, and then see larger chunks on the bottom.

Results will vary depending on your blender. Use the cinnamon powder however you like.

Spice grinders are specifically made for grinding spices, imagine that! So if you have a two-in-one coffee grinder/spice grinder, you can definitely use that to grind up your cinnamon sticks.

I don’t recommend using a food processor. Yours may work, mine doesn’t work well at all. The above two electric methods seem to work much much better.

There you go! Once you start using fresh home ground cinnamon you may not want to go back to the store-bought cinnamon powder. Enjoy!

Again make sure to check out www.olivenation.com, that is where I get my high-quality cinnamon among other products. Use code MATT20 at checkout for 20% off!

Here are other recipes with cinnamon you may like: 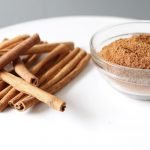 How to Make Ground Cinnamon From Cinnamon Sticks

How to Make Ground Cinnamon from Cinnamon Sticks

NOTE: Try a handful of the options and see which option works the best for you. TIP: I get mine at www.olivenation.com. Use the code MATT20 at checkout and get 20% off every order. There are about 6 calories per tsp of ground cinnamon.

Do you like the recipe? Please give it a rating and comment down below, I really appreciate it.  If you make it tag me on Instagram @inthekitchenwithmatt. Also, sign up for the newsletter so you won’t miss out on any of my new posts and recipes.

Check out my other website 101 Creative Dates for fun date ideas. Food and dating go hand in hand!