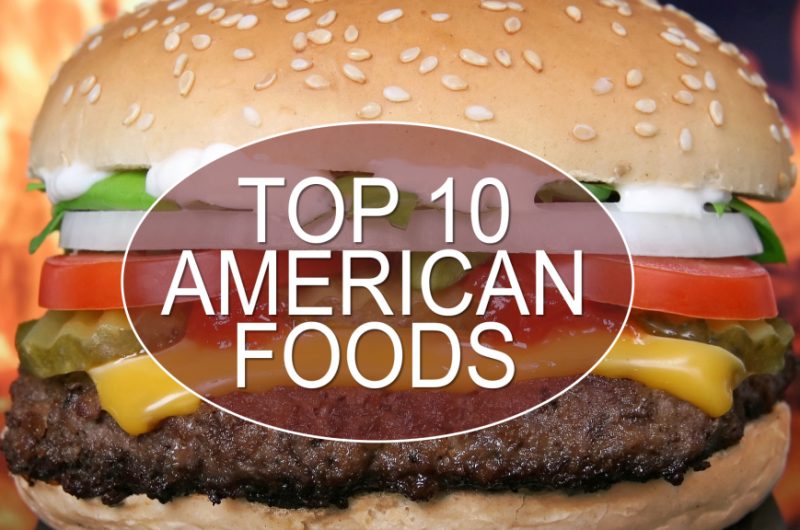 Most Popular Foods in America

As I get older I get more and more fascinated with food statistics. I like finding out how popular foods are in the United States and in the rest of the world. Many times on my YouTube channel I have done long live streams where I chatted with my followers about my favorite worldwide foods. In this article, I focus on the Top 10 most popular foods in America.

This is not an exhaustive list and is somewhat subjective, the term “popular” in and of it self is slightly subjective but has objective data to back it up. I pulled the data from many different sources (cited) and other lists, but looking at the list I tend to agree. Also, I will include links to recipes that I have for each of those items on this list.

That way you can make your own if you want. Especially if you live outside of the US and want to try making one of the most popular foods in America at home. And for the most part, all of these foods are pretty easy to make. Let’s get started!

It is not surprising to see that potato chips made the list. Everywhere I go, parties, etc. I see potato chips. At the supermarket, there are rows and rows of chips and several different flavors of potato chips.

According to Statista in 2020, 284.37 million Americans ate potato chips. That is an insane amount of potato chips. Do you want to know another country that eats a lot of potato chips? France! Who knew? Potato chips originated in the United States, but happy to see the people of France love them almost as much as we do here in the US.

Whether you spell them donuts or doughnuts, it doesn’t matter, these tasty pastries are number 9 on this the most popular foods in America list.

Ever since I was a little kid, I enjoyed eating donuts. Walking to the local donut shop and picking up a few, or a dozen, haha. Such an amazing thing to eat for breakfast or a treat throughout the day. Here in the United States, it is easy to find a donut shop, Krispy Kreme, Winchell’s, Dunkin’, etc.

According to this article, over 10 billion donuts are consumed in the US every year! That is an insane amount of donuts.

Want to make your own Krispy-Kreme style donuts at home? Check out this homemade glazed donuts recipe. Or maybe you love chocolate cake donuts or pumpkin cake donuts? I have recipes for those too.

Coming in at number 8 is ice cream. Another childhood favorite of mine. I have fond memories of going to the Thrifty store and getting a scoop of Thrifty brand ice cream with my family. My favorite flavor back then was Chocolate Malted Crunch.

The average American consumes a whopping 23 pounds of ice cream and other related frozen desserts in a year. The most popular flavors being Vanilla first, then Chocolate. I do love some ice cream!

Learn how to make this chocolate ice cream in a bag or this 3-ingredient vanilla ice cream.

Next up on the list number 7, chicken tenders. Whether you get McDonald’s chicken McNuggets, Chick-fil-A nuggets, or many other varieties, Americans love their chicken tenders.

With that said according to this article that may not always be the case. There appears to be a decline for those tasty chicken morsels. I haven’t seen it though, it still seems to be one of the most popular meals for kids when parents go to Fast Food restaurants.

Check out this recipe for chicken tenders and make them at home.

An all too common phrase we have grown accustomed to here in the United States and many other places around the world. Coming in at the number 6 spot for the most popular foods in America is Soda.

People everywhere not just in the US, can’t get enough of their sugary soda. I am not a normal person I guess, I don’t drink hardly any soda.

Just how popular is soda here in the US? According to this article, the average American drinks 45 gallons of pop/soda every year. Which is roughly 470 cans, well over 1 can of soda every day. Is it safe to say, Americans have a soda addiction?

Coca-Cola has been the number 1 soda in the US and around the world for decades.

Number 5 Most Popular Foods in America is Pizza!

Up next is the wildly popular food, pizza. I can see why it ranks number 5 of the top 10 most popular foods in America.

I have many fond memories making and buying and eating pizza with friends and family. My family used to drive to Little Caesar’s and get a couple of pizzas as well as rent a movie at the next-door movie rental place.

I have definitely eaten my fair share of pizza over the years. Pizza is actually one of my favorite foods when I feel like splurging.

According to this article, Americans eat a whopping 3 Billion pizzas per year with the average American eating around 40 pizzas a year.

Wether you eat them plain or dip them in milk, or use them in many different recipes, you can’t go wrong with them.

Oreos aren’t my favorite cookie but I definitely enjoy them. I use them as an ingredient in my desserts quite a bit. And if you love Oreos and you love chocolate, you will love these Oreo Pops.

Just how popular are Oreos? According to Statista, 71.26 Million Americans ate Oreos in 2020. That is a heap ton of Oreos. I know I ate several or used them in recipes a lot during that time.

Number 3 Most Popular Foods in America are French Fries

Time for the 3rd most popular foods in America, French Fries. I couldn’t agree more, I absolutely love French fries. I loved them as a kid and still love them.

Honestly, anything potato is awesome, but French Fries are the best potato dish in my opinion. Nearly every fast food restaurant and many diners/restaurants serve a version of French fries.

According to this article, Americans eat almost 30 pounds of French Fries each year! And Belgians eat even more, 1/3rd more. Which restaurant in America sells the most? You guessed it, McDonald’s.

They actually use roughly 7% of ALL the potatoes grown in the US for their French Fries. 1/3 of all the French Fries sold in the US come from McDonald’s.

I can see why, their fries are definitely delicious. Not my favorite though. I actually prefer fries from places like Five Guys. Want to learn how to make amazing crispy French Fries at home? This is awesome homemade French Fry recipe.

And coming in at number 2 on the list are hot dogs! Yes! I knew these would be on the list when I was doing my research. I actually eat quite a few of these each year. Some weeks I eat one every day for lunch, haha.

They are the classic ballpark food and carnival/theme park food. And it is a popular streat vendor food in some of the busy American cities, like New York.

They are incredibly easy to make at home, probably one reason they are so popular. And kids absolutely love them. Just don’t watch a video on how they are made, lol.

According to Hot-Dog.org Americans consume 20 Billion, yes Billion, hot dogs each year, with an average of 70 per person per year. And hot dogs are served in about 95% of American homes. Yes, we love our hot dogs here in the US.

The Number 1 Most Popular Foods in America are Hamburgers!

Oh yes, oh yes, Hamburgers are the number 1 most popular foods in America. Surprised? I am not. I am slightly addicted to eating hamburgers. If I had it my way, I would probably eat one every day, haha.

Homemade burgers are my preference, but I definitely don’t mind fast food burgers, especially Wendy’s and Five Guys, which are two of my favorite places to go. Sorry McDonalds! And it is hard to be a good sit down burger joint when you have the time, and are willing to pay extra.

Many households in the US grill burgers and hot dogs all year around and especially on Holidays like Memorial Day, 4th of July, and Labor Day.

According to Yahoo and the USDA, Americans eat an average of 2.4 hamburgers a day, or 50 Billion burgers each year. I definitely don’t eat that many, but apparantley many Americans do.

If making them at home you have got to try this juicy hamburger recipe. And why not make these homemade hamburger buns to go with the patties?

To sum up here are the Top 10 Most Popular Foods in Amercia:

I hope you enjoyed learning about these popular American foods. There are other “popular” lists out there that you can find, but they all have similar results with some differences of the items on the list.

If you love desserts, check out The Most Popular Desserts in America article.

Time to go out there and eat some of them!