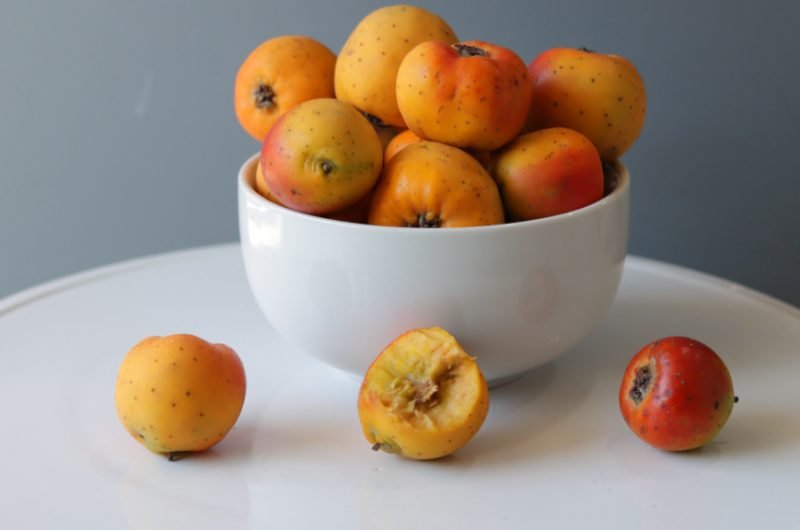 Time to take a look at another fruit, the tejocote, also known as the Mexican hawthorn, manzanita (tiny apple), and the scientific name, Crataegus mexicana.

I really enjoy trying out and learning about new fruits as well as eating my favorite fruits. In this post, you will learn where the tejocote comes from, what the nutritional benefits are, how to eat it, and what it tastes like.

Where does the Tejocote come from and where does it grow?

The Tejocote is native to the mountains of Mexico as well as parts of Guatemala and have been around for thousands of years. It can also be found in the Andes, and recently has been grown in the United States. This fruit is a type of hawthorn and is said to be one of the more useful fruits of this species.

It is a shrub or small tree ranging in height from 15 to 30 feet tall. I find fresh tejocote fruit at my local International/Asian market. Canned versions can usually be found where the Goya products are sold in markets in the US.

The tree will grow in temperate climates and can withstand frost. Typically grown at elevations between 3000 and 8000 ft.

What are the nutritional benefits of the tejocote?

This amazing little fruit has a fair amount of health benefits:

Read more about the health benefits of this fruit here.

How to eat the Tejocote

There are many uses and ways to eat the Tejocote. You can eat them raw if you like. Just rinse them off and take a bite out of it. And eat around the pit in the middle. So similar to how you would eat an apple. The skin is edible.

In Mexico, they are eaten raw, but probably more widely used as an ingredient in other dishes. Because of its high pectin content, it is commonly used in jams and jellies.

Candy called rielitos is made from the paste of the tejocote.

During Christmas and New Year’s Eve, it is one of the main ingredients in a very popular Mexican Christmas punch or Ponche Navideno Mexicano. For that usually, you would just use a paring knife and cut around the core.

Some other interesting uses for the tejocote are that they are processed to extract the pectin for food, textile, pharmaceutical, and cosmetic uses.

Interesting Fact: It used to be illegal to import tejocote into the United States.

The fruit itself is kind of bland. It is a little creamy or mealy and not very juicy. It kind of reminds me of a mix between a soft mushy apple and a quince. There just isn’t much flavor to it, so I can see why it is added to other things.

Some people have compared it to a plum mixed with an apricot. But I haven’t found that in my experience. There wasn’t any sweet or sour in taste, just kind of blah. There is also a slightly bitter or astringent taste to it. It isn’t horrible to eat fresh, it just isn’t super delicious that way, in my opinion.

If you get the chance pick some of these up and use them in other recipes or just try them fresh and see for yourself.

Check out the video I made on the tejocote fruit.

Here are other interesting articles and recipes you may like: