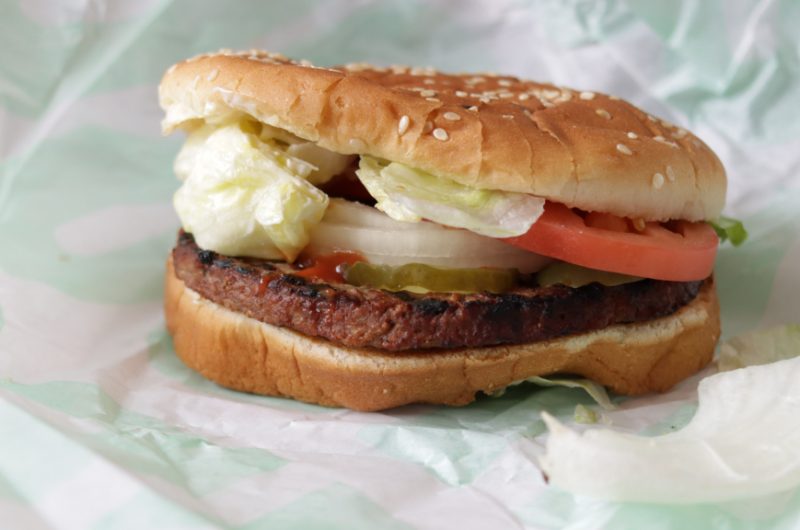 When I first heard about the Impossible Whopper a couple of years ago, I was adamant about not wanting to try it. Why would I? I love meat! Like I really love meat. Bacon, beef, chicken, ham, are all some of my favorite things to eat. Especially this homemade amazing juicy hamburger.

But after speaking to a friend of mine recently, I decided to finally give it a taste, and see if fake meat actually tasted good to me. In this review, I will describe what the Impossible Whopper looks like, and what it tastes like to me. Remember taste is very subjective.

If you are on a Vegetarian diet, this Impossible burger just might be for you.

NOTE: This review is coming from the point of view of a person that is not on a vegetarian or vegan diet. But from someone who absolutely loves eating a variety of meat products.

Does the Impossible Whopper look like a real whopper?

I am not sure what I was expecting, but from the commercials they made it seem like the Impossible whopper looked exactly like a normal whopper. I went to my local Burger King which happens to be around the corner for me and picked one up. The price was exactly 1 dollar more for it. Not too bad.

I got home and removed the plant-based burger from the take-out bag and proceeded to unwrap it. And guess what? At first glance, the Impossible Whopper looks exactly like a regular whopper. Seriously, I was impressed how close it looks to the original.

And that makes sense that they would look similar. Each one uses the same bun, pickles, lettuce, tomato, onions, ketchup, etc. I didn’t order cheese or bacon on it, because the bacon would defeat the purpose of trying a plant-based burger haha. Plus I had some bacon for breakfast anyway.

The only thing that really stood out to me is the patty looked too perfect, like perfectly round, and looked a little too manufactured. The color looked fairly close but a bit off from what I am used to seeing when it comes to grilled burgers. But still, the Impossible Whopper does closely resemble the original.

I brought it up close and smelled it. It pretty much smelled like a burger, maybe slightly different, but I don’t think most people would tell the difference.

What does the Impossible Whopper taste like? Is it good?

Time to take a bite. I took a good bite out of the burger, and after giving it a good chew, was pleasantly surprised. It was actually pretty decent. To me, it didn’t taste exactly like meat, but fairly similar. The texture is pretty close but doesn’t have the yummy fatty taste, that I absolutely love.

Since I took a bite with pretty much the bun, and all the fixings, I thought I should also try just the patty itself. I broke a piece off and gave that try. Again, it doesn’t taste bad to me but doesn’t taste quite like a beef patty in my opinion.

Another thing I noticed is that after eating the whole Impossible Whopper, it didn’t seem as filling as a normal Whopper to me. I am not sure if there is anything to that or not. But it is quite possible the plant-based Impossible patty isn’t as filling as actual beef.

Going back to the taste, if you aren’t a big burger aficionado like me, you may not even be able to tell the difference between the two. Which I think is a good thing, it will definitely appeal to Vegetarians. If you are Vegan, I am pretty sure you can ask that the patty be prepared on a different grill. Although I believe their buns are made with eggs, so you would need to clarify that first.

Would I buy it again?

To sum up, I personally don’t see myself buying it again. Not because I didn’t like it, it tastes fine to me, but because I love meat and to me, it doesn’t taste as good as real beef does.

But! It doesn’t taste bad. I think if you are Vegetarian or Vegan, you will be quite happy with the Impossible Whopper from Burger King.

I haven’t tried the other plant-based patties that are sold in the supermarkets, so I don’t have an opinion on those.

Thanks for reading my review of this very popular plant-based burger.

Check out the video review I made for it here:

Here are other recipes and reviews you may find interesting:

How to Store Brown Sugar